This was today published on WPBSA site:

Masters Trophy to be named after John Spencer

World Seniors Snooker has today announced that the World Seniors Masters trophy is to be named after the great John Spencer, the first-ever winner of the professional Masters tournament.

The event will be staged at the iconic Crucible Theatre, Sheffield on 12th April 2018 and see eight players battle it out to win the John Spencer Trophy.

Jason Francis of World Seniors Snooker said: “As a three-time world champion, the first winner of the Masters and former WPBSA Chairman, John did so much for the game and I’m delighted that his partner Jean has granted us permission to name our trophy in his honour!”

Jason Ferguson, WPBSA Chairman said: “John Spencer was not only a huge snooker star during the formative years of the modern era, memorably becoming the first player to win the World Championship at the Crucible, but he was also one of my snooker heroes as a young player. He also previously served as WPBSA Chairman and I have many very fond memories of him. I kept in touch with him and spoke to him just before he passed away.

“The decision to name this trophy after him is a fitting one and I am sure that the event will be a success.”

Following the conclusion of play at the final qualifier at Upton Park Snooker Centre earlier this month the line-up for the World Seniors Masters event was finalised.

Jonathan Bagley, a taxi driver from Leeds, defeated former professional Barry Pinches on the final black ball to become the final qualifier for the event. He will now realise a dream to walk out at the Crucible Theatre where he will face 1985 world champion Dennis Taylor.

Jonathan completes a stellar line-up for the event which will also see former professional Michael Judge, who won the first qualifying event in Newbury, come up against seven-time world champion Stephen Hendry in the last eight.

The full draw is:

The winner will take home the John Spencer Trophy and a first prize of £7,500.

Here is David, with the reigning Seniors World Champion, Peter Lines. The Q7 was held in the Northern Snooker Center in Leeds, Peter’s club, and one of the nicest places you could find to play snooker!

Here are the full results of the week-end:

There is now only one spot for the grabs,  to earn a chance to play in the World Seniors in Scunthorpe in March! the World Seniors Q8, the last one for this season, will be played from 9 to 11 March 2018, in Dublin.

In this Press Release, Jason Francis has today announced a new Title Sponsor for the Seniors World Championship: 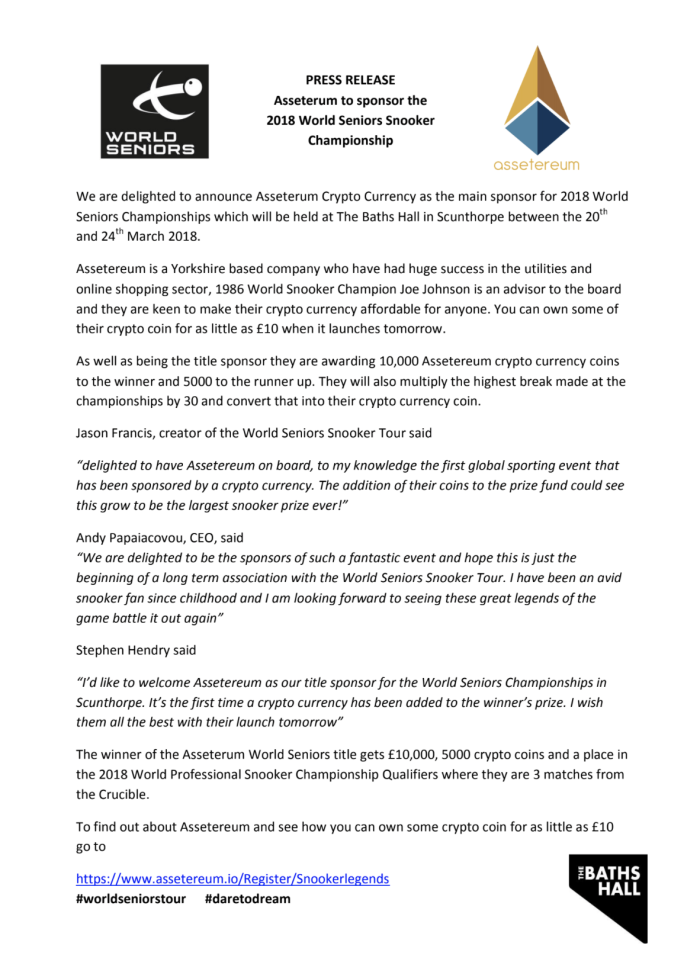 This is of course great news for the players, and for the future of the Seniors Tour. Jason deserves a lot of praise for the way he seeks and secures deals for the Seniors Tour, in various sectors, not just in the betting industry. Make no mistake, this is a massive effort and a huge personal investment as well as financial risks.

And here is the link : https://www.assetereum.io/Register/Snookerlegends

(in the text above, it’s just an image, so not clickable).

Jonathan Bagley won the Seniors Masters 2018 Q2, beating Barry Pinches on a blackball shootout. Here are the results on the week-end in Upton Park:

Yesterday, the 1986 World Champion, Joe Johnson, was in Scunthorpe, with Jason Francis to promote the upcoming World Championship.

Here is the report by the Scunthorpe Telegraph

Former world champion speaks ahead of snooker championship in Scunthorpe

For the second consecutive year, the town will play host to the World Seniors Snooker Championship.

The tournament will once again be held at the Baths Hall, following a hugely successful event in 2017.

A special launch event was held at The Baths Hall yesterday (Friday, February 16) in which the 1986 world champion Joe Johnson was present to launch the tournament, which will run from March 20-24.

The 65-year-old spoke to the Scunthorpe Telegraph about the upcoming event, and stated just how much he was looking forward to returning to play at the Baths Hall.

“Absolutely. It was fantastic last year and we’re all very excited to return to the Baths Hall next month,” Johnson told the Telegraph.

“I thought the event was really professional and it was well attended by the people of Scunthorpe.

“This part of the country has always been a hotbed of snooker. There has been some top players from round such as Sid Hood, Mike Hallett and Ray Edmunds – we knew of the interest in snooker around here, but it was so great to see the crowds turn out like they did in Scunthorpe.”

Here is the Schedule for the first round of the Seniors World Championship 2018:

The second qualifying event for the Seniors Masters 2018 starts tomorrow at Upton Park. Here are the draw and format: 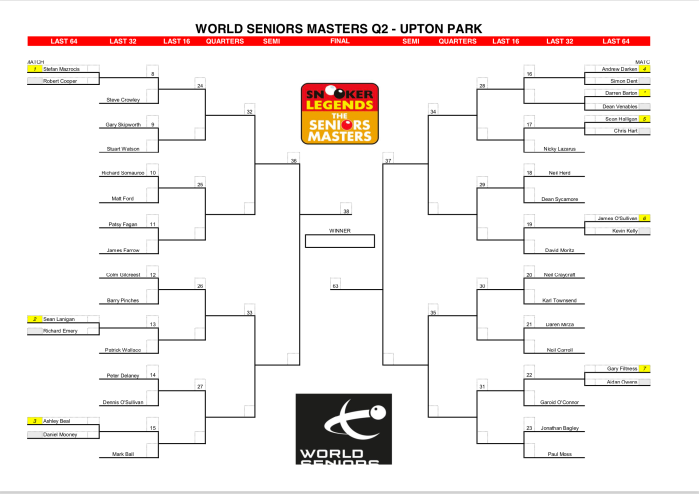 Good luck to all involved!

A launch event will be held ahead of the Seniors World Championship 2018. It will take place on March 16, with Joe Johnson as a very special guest. 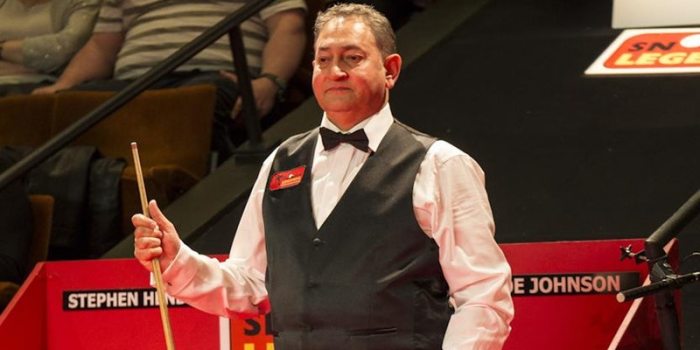 The Baths Hall is proud to be hosting the Snooker World Seniors Championship in Scunthorpe between Tuesday 20th to Saturday 24th March 2018. The event will be streamed live across the world and last year was watched by 3m viewers in China alone.

You are invited to join Events that Rok Limited and Snooker Legend Joe Johnson at the launch event and hear about how you can get involved and the sponsorship opportunities that are available to you and your business.

Registration is from 9am with tea and coffee on arrival.

The event is free but you need to register. To do so follow the link above.

Michael Judge is the first Senior player to book his place at the Crucible come April. He won the first Seniors Masters 2018 qualifying event in Newbury in some style: indeed he made three centuries – 134, 111 and 106 – on his way to the title.

He beat Lee Richardson in the final

Here are the full results:

There were two other centuries during the event: 109 by Patrick Wallace and 103 by Stephen Campbell.

As Jason Francis reminded us on twitter and by Press release:

You have until Midnight tonight to enter Masters Q2 and get that final place at the Crucible in Sheffield on April 12th to play a legend!!
Upton Park Snooker Centre, Sat 17th and Sunday 18th Feb.
Enter now by clicking here https://www.snookerlegends.co.uk/wscform2.html

Meanwhile the action continues in Newbury where we are down to the last 16:

Here is what happened yesterday