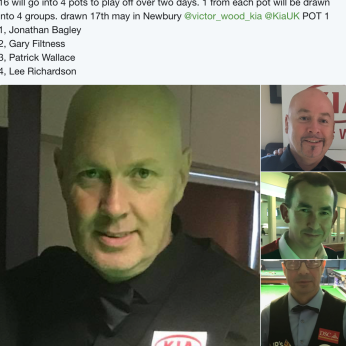 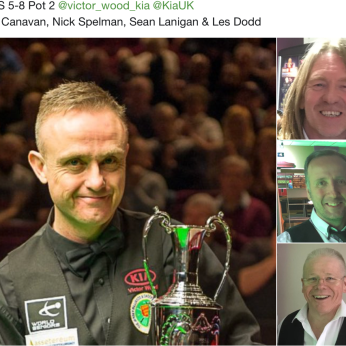 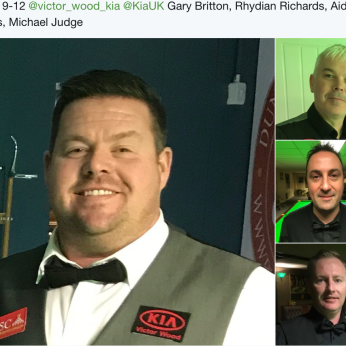 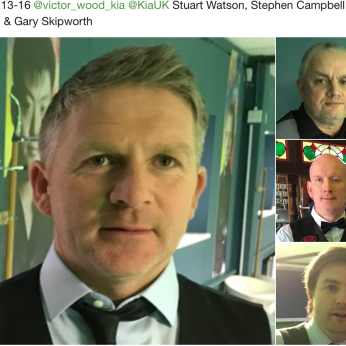 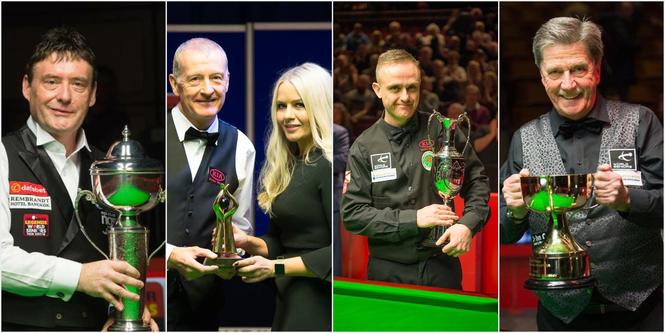 From China to the Crucible, the inaugural World Seniors Snooker Tour has visited clubs and famous arenas in the UK and beyond.

Building on from the success of the popular Snooker Legends series and the re-invention of the World Seniors Championship, entrepreneur Jason Francis and his team expanded the seniors palette this season by adding three further major titles. The concept has gained momentum and approval, even being recognised by the sport’s governing body, the WPBSA, as opportunities and dreams have been realised for all amateur players aged 40 or above.

​The opening major of the season in October saw Jimmy White capture the UK Seniors Championship at the The Harlequin Theatre in Redhill; a quarter of a century on from winning the professional version.

White defeated Ken Doherty 4-2 in the final after overcoming amateur qualifiers Les Dodd and then Jonathan Bagley in the Quarter and Semi-Finals. During the event Doherty compiled a break of 137.

One of the most iconic venues in snooker history is Goffs – synonymous with professional snooker in Ireland. It got a chance to stage a big competitive event again with the creation of the Irish Seniors Masters in January.
There was also a return to the competitive fold for Steve Davis, who was a replacement for Stephen Hendry. The Nugget made the most of his cameo by eliminating Dennis Taylor, John Parrott and then qualifier Bagley 4-0 in the final.

The main event of the season was the expanded World Seniors Championship that again was open to any amateur player aged 40 or above.

Evolving the tournament and making it even more inclusive, there were eight opportunities for players to feature at the main stage via various club qualifiers and join the invited legends at the Baths Hall – double the amount from 2017. As well as domestic qualifiers, there was also a ground-breaking event staged in China – proof that the tour is thinking internationally.

16 players would remain in Scunthorpe. Much talk revolved around Hendry and his chances of claiming the title and a subsequent berth at Crucible qualifying afterwards, but it was the less talked about Aaron Canavan – a car restorer from Jersey, who ‘Dared to Dream’ and walked off with £10,000.

Canavan held his nerve in the final against former World Professional Championship Quarter-Finalist Patrick Wallace by slotting home the Tie-Breaker Black Ball to win 4-3, having been 3-1 down.

It didn’t work out for Canavan at the EIS earlier this week, but he can feast out on being a reigning World Champion for a good while yet.

The last major of the campaign was the one-day spectacular held at the Crucible on Thursday. The Seniors Masters saw 70 year old Cliff Thorburn roll back the years and lift the John Spencer Trophy aloft after a Tie-Breaker Black Ball victory over Bagley in the final.

Despite not securing one of the four major trophies, in some ways, Leeds taxi-driver Bagley was the player of the season because of his sheer consistency throughout.

Including the World Seniors in 2017, Bagley has qualified for every venue so far and finishes the tour as the Number 1 ranked amateur. Whilst it was terrific seeing Thorburn so joyous at winning the Masters, a trophy for Bagley would have been richly deserved given his efforts over the last few months. Of the five majors so far, he has made two finals and three semi-finals.

Hendry’s form in these events has also been a notable talking point having failed to make a final in the three legs he participated in. In fact, his only victory was a 3-0 defeat of Tony Knowles at Redhill. It is maybe a wake up call for the seven-times World Champion if he wants to be successful on the tour next season.

Talking of next season, the World Seniors Tour appears to be evolving again with qualifiers potentially being held in the USA and Australia. Considering it will be just its second full season, so much has been achieved in such a small space of time.

Although the quartet of major champions has now been confirmed, the Top 16 ranked amateurs from this season will compete at a special knock-out competition in a few weeks time. Bagley will be the top seed.

Michael is passionate about snooker and, through his blog, gives us great insights into the amateur and women’s game as well as the professional events. He also covers pool, billiards and more. recommended to all cue sports fans! 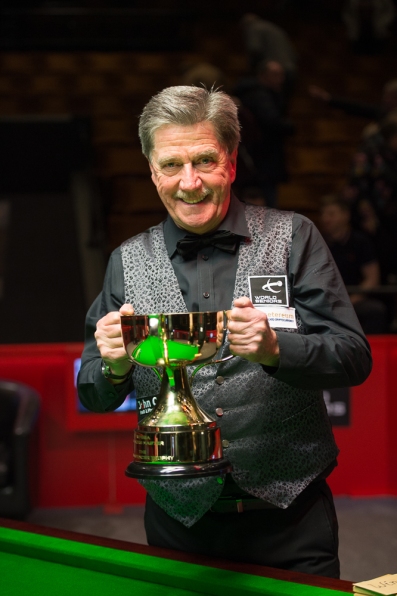 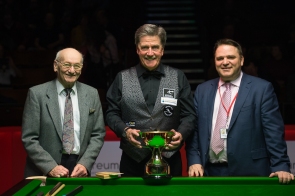 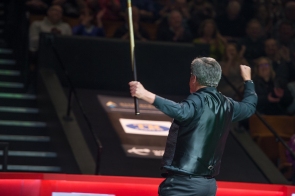 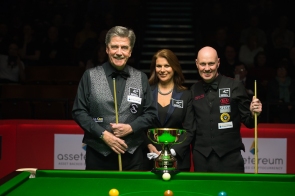 Cliff beat Jonathan Bagley by 2-0 in the Final to lift the John Spencer Trophy … the same John Spencer who had beaten him in the first ever World Final at the Crucible, 41 years ago!

Here is an excerpt with Cliff’s quotes … to say that it meant a lot is a huge understatement!

The 1980 world champion said: “It’s very meaningful for me being back here at the Crucible. Jonathan actually beat me the last few times but I just felt good being here – there are lots of good memories here.”

“I’m 70 now and I get a little nervy but I’m just so proud to win the first John Spencer Trophy. John helped me to turn pro and he was a great friend for all of my life, he was a classy individual.”

And here are all the images I took at the event:

Yesterday evening, the Assetereum Seniors Masters 2018 was “launched” at the Mercure St Paul in Sheffield… there were Legends aplenty at the gala dinner attended by all the players. 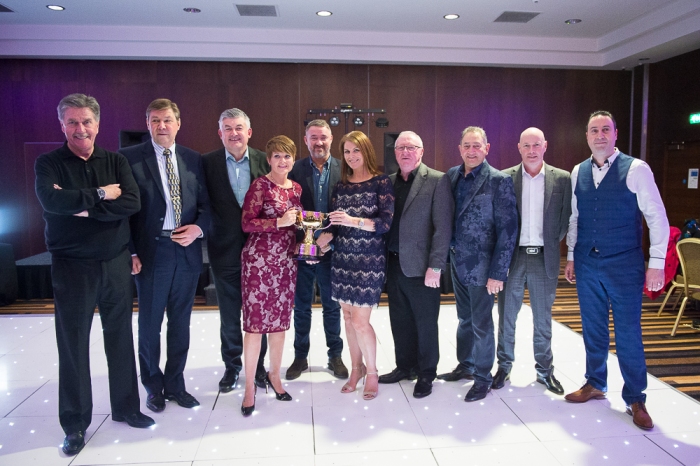 Mike Watterson, the man without whom the World Championship wouldn’t be synonim of “Crucible”, was amongst the guests and was duly honoured. 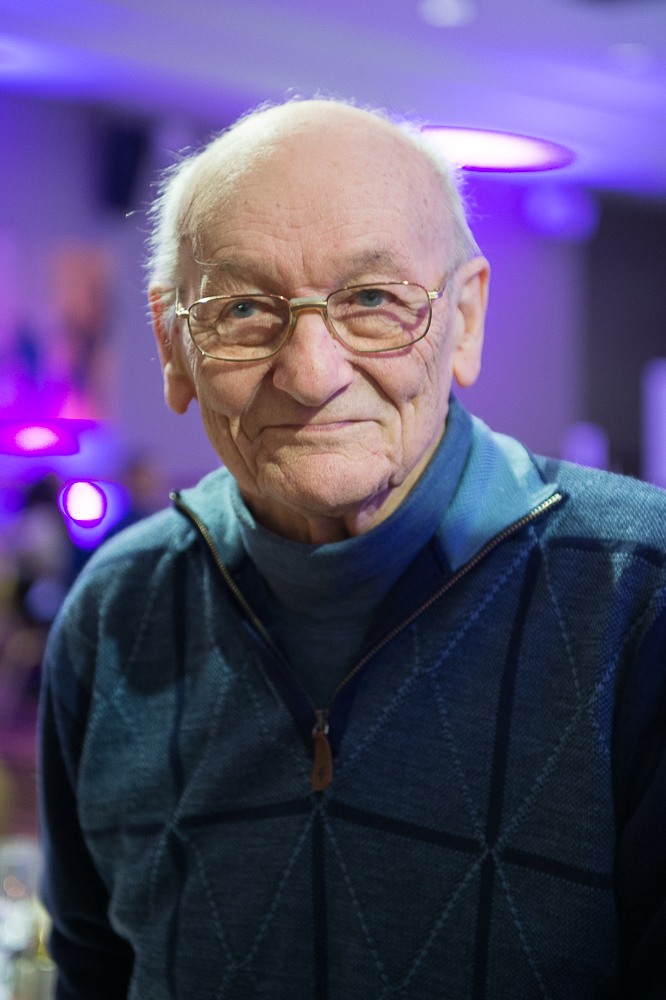 The evening had everything, good food, laugher, quizzes and a karaoke… 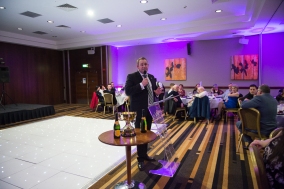 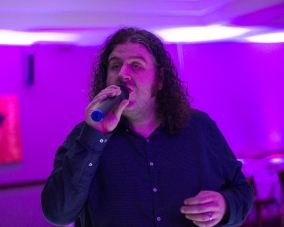 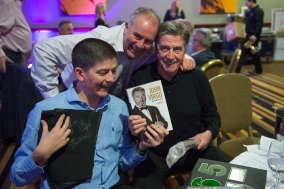 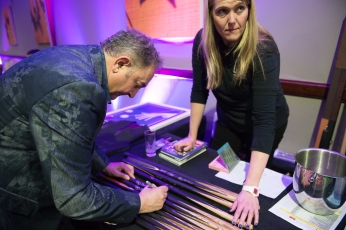 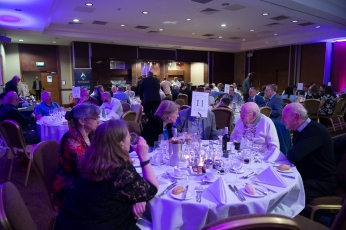 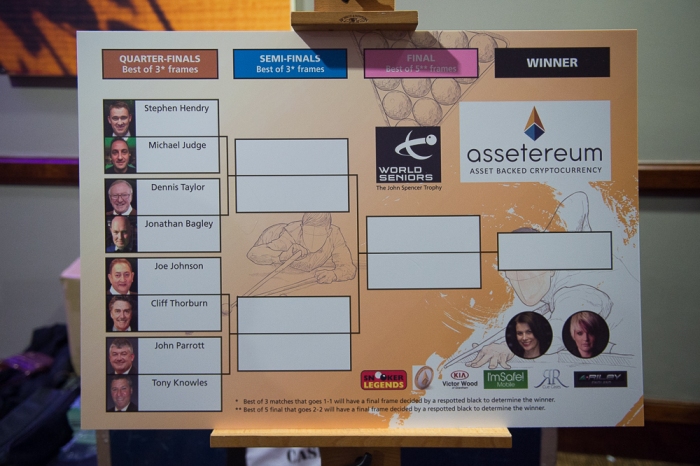 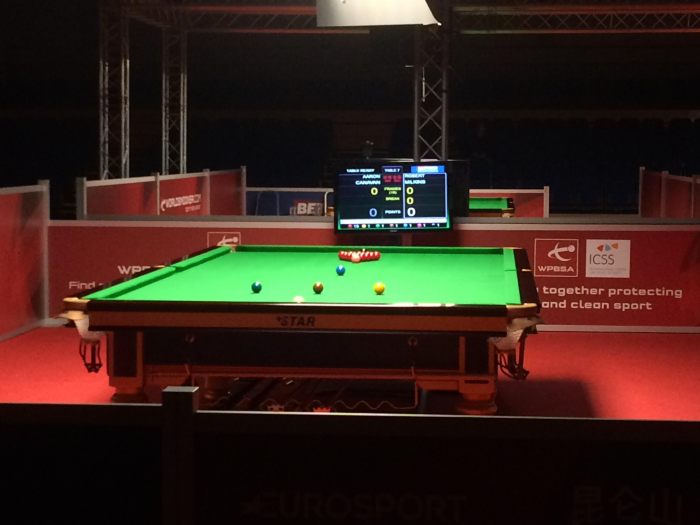 Robert Milkins, a professional since 1995, who was once ranked as high as 13th in the world, had too much experience for Aaron who was competing in his first ever professional match. Robert eventually beat Aaron by 10-1. But the match wasn’t as one-sided as the score suggests. During the first half of the match, Aaron competed really well, in particular in the tactical department. However he didn’t have Robert’s scoring power and struggled with the pace of the table that was … too slow! Indeed, in preparation of this match, Aaron had practiced on a very fast table. Yesterday, in the English Institute of Sports, its was chilly and damp, and the tables were playing slow (this was told to me by both Aaron and Robert independently).

No comments needed … just listen! It means so, so much!

This interview was recorded today by Jason Francis and shared on the Snooker Legends Facebook page.

The scene is getting ready at the EIS 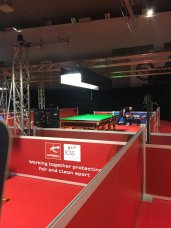 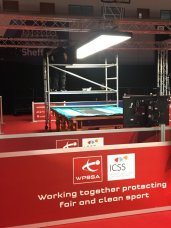 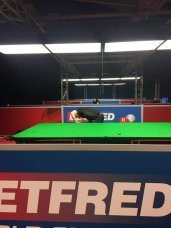 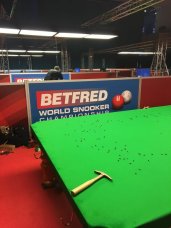 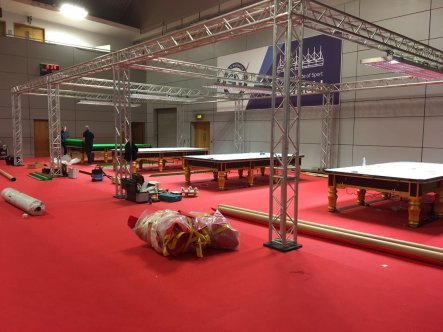 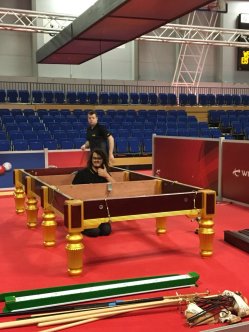 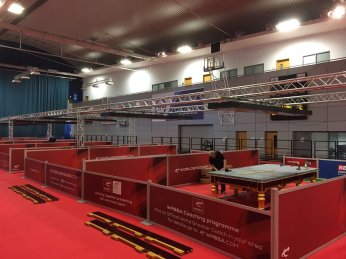 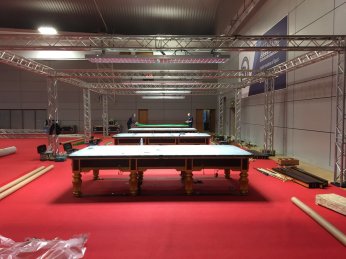 Worldsnooker has published the draw and format for the World Championship 2018 Qualifiers.

Aaron Canavan, the Seniors World Champion will face Robert Milkins on the very first day of the competition over best of 19, two sessions: 11th of April, 10 am and 7pm (UK time). Best of luck Aaron. Should he win, Scott Donaldson or Tyler Rees would be waiting next. 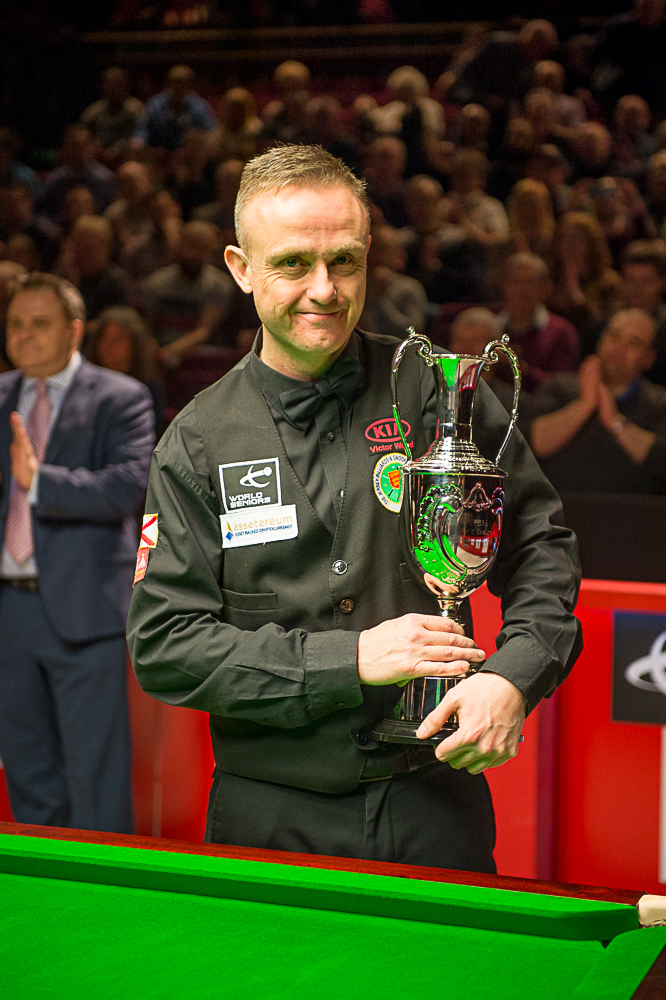