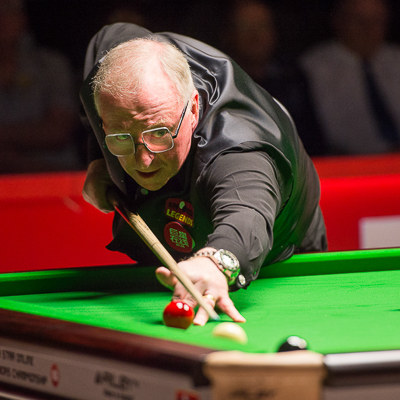 Dennis Taylor is most famous for winning “That Final”, the 1985 final, beating Steve Davis, the reigning World Champion and World n°1, by 18-17, on the last black, having never been in front in the match at any stage before. That final, finishing well past midnight and watched by over 18 millions on BBC really captured the imagination of the snooker fans. It probably remains the most discussed snooker match of all times.

Because of this final, people forget that, during the eighties, Dennis won no less than  19 professional titles in total, including the Masters in 1987. On that occasion he beat Alex Higgins by 9-8 in the final. He also won the World Cup three times with the Ireland team: in 1985/86/87.

Dennis Taylor is a regular commentator on the BBC.

Dennis Taylor was ever present on the Seniors Tour since it started. He announced his retirement from competitive snooker after the 2021 World Seniors Championship. He may not be playing anymore but he’s still around… commentating (of course!).