This Press Release was sent out today

Headlined by the recently-announced ROKiT World Seniors Snooker Championship which will be played at the Crucible Theatre this August, the season will include a minimum of six major ranking events to be held over the next 12 months.

This will be followed by a return to the iconic Goffs venue in Ireland next January for the Seniors Irish Masters won this season by Jimmy White, prior to a new One Frame Challenge event at the historic St Georges Hall venue in Liverpool which will celebrate 50 years of the iconic Pot Black which was first held in 1969.

In April the circuit will head to Plymouth for another new event, the ROKiT Seniors British Open which will pay tribute to the ranking event than was held there from 1994-2000.

The final event of the season will be the ROKiT 6-Red World Seniors Snooker Championship, which will remain in Northern Ireland but move to a new location in Coleraine. As in 2018, the tournament will carry a £20,000 winner takes all prize and will be held from 5-6 June.

Tickets for next season’s events in Hull, Liverpool and Plymouth go on sale tomorrow (1 May 2019).

Tickets are already on sale for the ROKiT World Seniors Snooker Championship in Sheffield in August.

All events include a VIP option to attend a champagne reception, to be attended by all legends who will be competing in that event.

Alongside our major ranking events there will also be new opportunities for our amateur qualifiers than ever before with tournaments to be held across the world.

Entries will open tomorrow for qualifiers across England, Belgium and Hong Kong, with tournaments also set to return to Canada and Beijing with further information to be revealed in due course. Players can enter events online here. 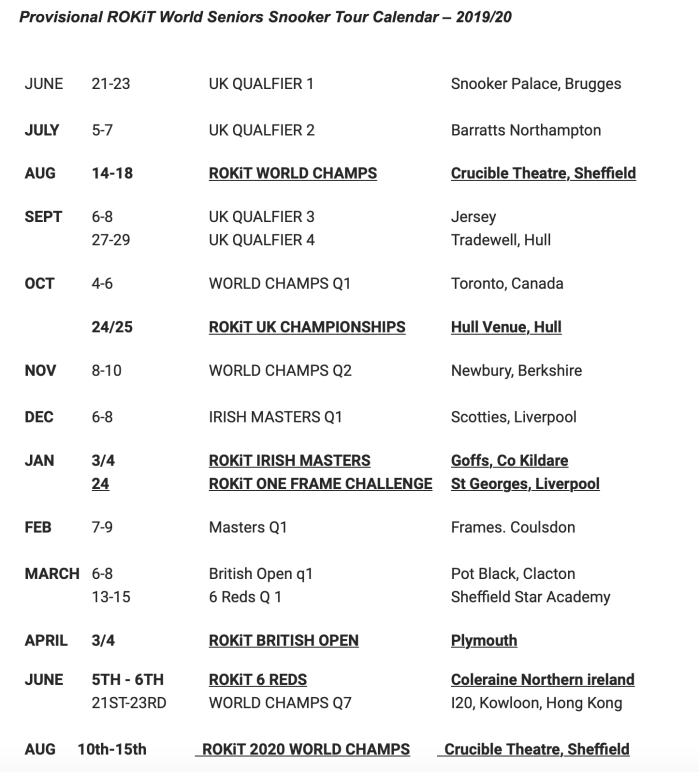 (Venues and dates subject to change)