The Defending Champion, Aaron Canavan will be first at the table at 10 am on August 16, 2019, the second day of the Championship. Aaron will play Au Chi Wai who won the Qualifying event in Beijing last season. Don’t be confused by the double naming, it’s the same guy! 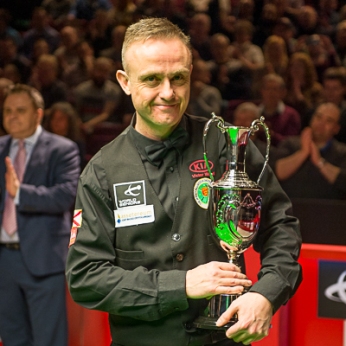 Aaron was a surprise winner in 2018. He has never been a pro and had rarely played outside the Channels Islands. Aaron may not have had a stellar season but he has been – still is – a wonderful World Champion and ambassador for the WSS ROKiT Tour. He welcomed players at his club in Jersey, for a qualifying event, and, at every occasion,  stressed how much the opportunities offered by the World Seniors Snooker Tour have made a difference in his life. In April, he was invited to play in the Main Tour World Championship Qualifiers, facing Robert Milkins, a former top 16 player, in the last 128. It was always going to be a huge task: everything was unchartered territory. Aaron was beaten by 10-1 but he gave it his all, and, in the second session ran his opponent much closer than the score suggests. Here is what he had to say before the match.

And when he finished runner-up at the six reds World Championship last season, with no prize money for his efforts, this is what he told the press in Jersey.

You will find Aaron Canavan profile on this blog here

His opponent, Au Chi Wai, is 49, from Hong Kong, and regularly plays in National competitions, in snooker and in pool, in China. Last May, Au Chi Wai played in the Q-School and reached the QF in the second event (source Cuetracker)

He has never been a pro, but has played in some of the Worldsnooker events. In 2010, he played as a wildcard at the China Open; his opponent was James Wattana. He played on the Asian Tour regularly whilst it was organised, reaching the last 32 in event 3 in the 2014 /15 season. (source cuetracker)

He also regularly plays in the Asian Championships. He  reached  finals on several occasions.

Au Chi Wai profile on wikipedia is minimal, but here it is

You can watch Au Chi Wai in action here, in an exhibition match in Hong Kong, against Mark Selby, in 2015.

Mini Preview: this is a hard one to call. Clearly both players are extremely capable. Aaron will feel both the motivation and the pressure of being the defending Champion. Au Chi Wai will want to do well in repesenting his country, he will come prepared but may suffer from jet-lag a bit. I’ll sit on the fence here …