The last match at the ROKit 2019 World Championship on August 16, 2019 will oppose Jimmy White to Rhydian Richards. 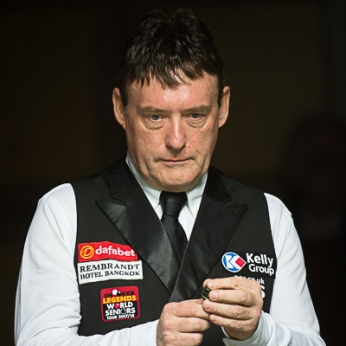 Jimmy White of course doesn’t need any introduction. He’s won everything – or about – as a professional except the World Championship and he has been a prolific winner on the WSS tour as well. He is extremely popular with the fans and his love for the game is immense.

I’m not going to repeat all I wrote in his profile on this blog, you will find it here.

You will also find his profile by Elliott West here.

Rhydian Richard, on the other hand, has never been a professional. He qualified for the WSS ROKiT 2019 World Championship by winning the first qualifying event.  He had already qualified for the Seniors World Championship in the previous season, and had beaten Joe Johnson in the first round. Rhydian has also beaten Darren Morgan in the 2018 Welsh Open – a main Tour event – and in the Final of the 2017 Welsh Amateur Championship. In 2016 he reached the semi-finals of the European Men Championship. All this is telling you one thing for certain: he’s a very capable player!

For what I have been able to find, Rhydian and Jimmy have never played each other.

Mini Preview. I have to make Jimmy favourite, not just because of his record, but also because Rhydian has never before played at the Crucible. It’s a very special experiance and it can be intimidating. However, I expect a hard fought match.
Prediction: Jimmy White to win.