The 2022 World Snooker Championship concluded yesterday with the 46 years old Ronnie O’Sullivan winning the title for a seventh time, equalling Stephen Hendry’s record. On the same day, his close friend, and legend of the game, Jimmy White celebrated his 60th birthday and was offered a great Crucible ovation by the snooker fans. This marks the end of the professional season … no more snooker for a while? Snooker blues? NO … the World Seniors Snooker Championship starts tomorrow and the good news is that, no matter where you are in the world, you can watch it,

The Crucible is getting ready once again… 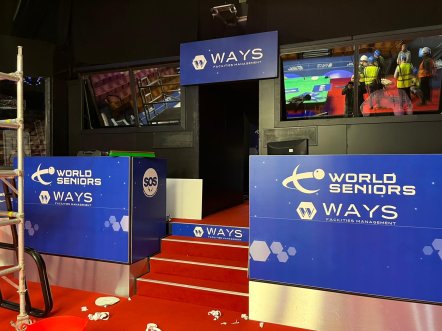 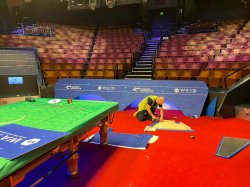 Throughout the tournament, you will be able to follow the scores and results here and on snooker.org .

The tournament features 24 players this time, 8 players are seeded in the second round.

Let’s have a look at the first round draw… the matches are best of 5 in the first two rounds, best of 7 in the quarters and semis, best of 9 in the Final

Bob Chaperon is a former professional. He won the 1990 British Open, a ranking event, beating Alex Higgins by 10-8 in the Final. The same year he was part of the Canadian Team that won the World Cup, beating Northern Ireland by 9-5. He has won the Canadian Amateur Championship twice, the second victory coming as recently as 2019. Bob had won a qualifying event for the 2019 Seniors World Championship, but was unable to participate… now he gets his chance.

Philip Williams has been a constant, and strong presence on the Seniors Tour over the last years.

Both players are former professionals and both have had significant success on the Seniors Tour in recent years. Both have been in the final of the World Seniors Championship in its present form: Patrick lost to Aaron Canavan in 2018, Darren lost to Jimmy White in 2019. This is a very hard first round draw for both of them.

I slightly favour Darren to win this one, Darren has qualified ten times for the Crucible as a professional, he reached the semi-finals in 1994 – beating Mark King, Willie Thorne and John Parrott, the number 2 seed, en route – and made it to the quater-finals in three more occasions. He still plays regularly and has a very strong temperament.

Lee Walker played as a professional this season. He is Mark Williams coach and friend. He’s a very methodical, reliable, solid player.

Tony Knowles is a former professional, twice a ranking event winner and three times a Crucible semi-finalist. Tony is most famous for beating Steve Davis by 10-1 in the first round of the 1982 World Championship, when Davis was the first-time defending Champion. Tony loves snooker with a passion, and will tell you countless annecdotes and stories about his sport and his fellow pros … you could listen to him for hours. He still can play – brilliantly in patches – but consistency is a bit of an issue.

I expect Lee to win this one, and Tony to get the crowd on his side. Especially the ladies…😉

Ahmed is a multiple USA snooker champion and qualified for this event by winning the pan-American Seniors Snooker Championship in November 2021. I haver never seen him play, so can’t comment on his style or strengths.

Wayne Cooper has been a strong presence on the Seniors Tour over the last couple of years. He’s a former professional but has never got much success on the main tour.

Now here is an intriguing one…

Wael Talaat qualified for the main Tour in 2016 … but I can’t remember him playing during that season at all. He had turned pro previously, in 1998, didn’t win a match all season and was relegated. The level of snooker in Africa isn’t as good as in other parts of the World of course. That doesn’t sound very promising. That said, Wael is very well respected in his country, and in North Africa in general. His dedication to snooker and his talents as a coach are praised by many.

Maria Catalano … is Ronnie’s cousin. She’s played very regularly on the women’s tour and, for many years, was second only to Reanne Evans. She’s very similar to Ronnie in her style – she goes for her shots – and, on form, she’s a very good break builder. In recent years however, family circumstances  have limited her opportunities to play and practice. I’m sure though that she will prepare the best she can for this occasion.

I could, and maybe should, stay on the fence here but… I’ll go for Maria.

Rory played as a professional this season; he has beaten Luca Brecel, Liang Wenbo and Dominic Dale in the last year. He’s a rather slow player, and doesn’t take too many risks, but he certainly can play and, make no mistake, he has his chances in this event. Rory has often been criticised for not shaking hands with female referees. I have met Rory many times, and he’s a lovely person. As a woman myself, I certainly never felt awkward in Rory’s company. He’s respectful, and warm… he just doesn’t express it in the West European conventional way.

Now this could be a very good match.

Nigel Bond only just retired, having lost his professional tour card a few weeks ago. He decided not to go to the Q-school and to devote himself to coaching. Nigel turned pro in 1989 and never fell off the tour until 2022 … that’s 33 years as a pro. Nigel is a very shrewd player. He’s also quite competitive. He won the 1998 British Open… beat John Higgins in a decider. He made the Final at the Crucible in 1995, losing to Stephen Hendry at his peak  … His problem in recent years is that he doesn’t score as heavily as he used to do.

Stuart Watson is a very solid player who takes every opportunity to play: Seniors Tour, Q-Tour, Amateur events … you name it. He has done very well on the Seniors tour.

I still think that Nigel will have too much for Stuart.

Michael Judge also played on the main tour this season. He hasn’t got much success overall which surprised me a bit. He’s only won two matches. That said, the flat draw system is brutal: he had to face the likes of Mark Williams, Judd Trump, Ricky Walden and Mark Allen in first round matches. Michael can play very well indeed, but I’m not sure his confidence is there at the moment.

Gary Filtness … is Gary Filtness. He is a character, he’s a coach, he’s a Londoner through and through and wears his heart on his sleeve. He has been thriving in the Super Seniors events. He has also suffered a lot because of back injuries…

I think that despite a difficult season Michael will have too much for Gary.

Now, very briefly… a word about the players seeded in the second round who I believe might be particularly vulnerable: